Flight is the story of humankind's most ambitious undertaking. From thousand-year-old flying machines and the trailblazing 'birdmen' who risked their lives to test them, to the Wright brothers' legendary first flight and the iconic spacecraft of the modern era, Flight weaves together the extraordinary h istory of aviation with an in-depth look at the mechanics of how planes work. Sumptuously illustrated and written by a former RAF technician, this is the definitive guide to how we conquered the skies. ...Show more

Flight: The Evolution of Aviation by Stephen Woolford; Carl Warner

Witness the daring exploits and dangerous challenges that form the story of flight in this beautifully illustrated book, filled with rare photographs and historical documents. Published in the year that marks 50 years since the first flight of the Boeing 747 and of Concorde, it describes the early pione ers, such as the Wright brothers and Alcock & Brown, as well as the highly skilled engineers developing aircraft today. From the early hot-air balloons of the Montgolfiers to the complex technology behind military jets and space rockets, this book looks at how flight emerged as a new means of military combat and how it became the leading mode of international travel, all in the space of less than a century. ...Show more

A celebratory look back at one hundred years of passenger flight, featuring full-colour reproductions of route maps and posters from the world's most iconic airlines From the first faltering flights over plains, water, and mountains to the vast networks of today, air travel has transformed the world an d how people see it. Maps played their part in showing what was possible and who was offering new opportunities. As tiny operations with barely serviceable airplanes pushed out farther and farther, growing and merging to form massive global empires, so the scope of their maps became bigger and bolder, until the entire world was shrunk down to a single sheet of paper. Designs featured sumptuous Art Deco style, intricate artistry, bold modernism, 60s psychedelia, clever photography, and even underground map-style diagrams. For the first time, Mark Ovenden and Maxwell Roberts chart the development of the airline map, and in doing so tell the story of a century of cartography, civil aviation, graphic design and marketing. Airline Maps is a visual feast that reminds the reader that mapping the journey is an essential part of arriving at the destination. ...Show more 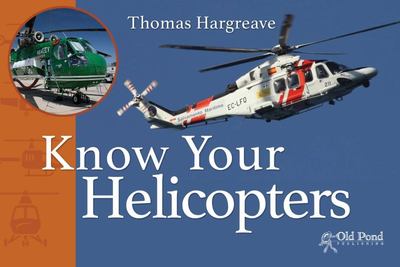 Know Your Helicopters by Thomas Hargreave

Know Your Helicopters is a pocket-sized book detailing 44 types of helicopters most commonly seen in service today from the smallest Robinson to the biggest Mil, including Bells, Boeings, Sikorskys and many more. A photograph of each machine is included.Tom Hargreave served 18 years in the British Army as an Army Air Corps pilot. In this time he accumulated 2,500 hours of flight time across a variety of helicopter types including the Gazelle, Lynx, Agusta 109 and the Apache. ...Show more From Tiger Moths to Test Pilot by Bernie Lewis

After gaining his Private Pilots Licence on Tiger Moths he tried to join the RNZAF for pilot training. He was rejected and caught the next available boat to England to join the RAF. He won the award for the best pilot on his course and went to a fighter squadron in Germany, flying Vampires and the F-86 Sabre. After completing that tour he qualified as an instructor and after a tour instructing with the Cambridge University Air Squadron he was selected for the Empire Test Pilots' School. After a year, he graduated as a Qualified Test Pilot on aeroplanes and helicopters and their armaments. He completed three years test flying for the services before being sent to the Central Flying School to do a Helicopter Instructors Course. He stayed at CFS until one morning he received a phone call from the Chief Test Pilot of Bristol Siddeley Engines, asking if he was tired of the RAF and would he like to join them as an Engine Test Pilot? ...Show more

The Spitfire Story - Told by Those Who Designed, Maintained and Flew the Iconic Plane by Jacky Hyams

The Spitfire Story, published in association with Imperial War Museums, is a fascinating anthology of first-hand stories from Spitfire heroes and heroines of the Second World War.The Spitfire is the world's most iconic aeroplane. Coming into its own during the Battle of Britain, it became famous during the Second World War as the only plane that could match the enemy fighters in the sky.Yet, even today, the history of the Spitfire contains many hitherto hidden or little-known stories of the men and women behind the plane; not only the gifted creators and inventors who brought the Spitfire to life, or the brave fighter pilots from many countries who triumphed in battle, but also the thousands of other people whose lives were affected by their personal connection to it - engineers, ground crew, factory or office workers, and their families. Spitfire Stories recounts the memories and stories of these people, from the birth of the iconic Spitfire in the 1930s to the present day. Among these accounts is the extraordinary tale of the fighter pilot who only discovered, fifty years on, the tragic truth of his last Spitfire flight, the businessman whose blank cheque changed the course of the war, the ninety-five-year-old Royal Air Force engineer who was determined to be reunited with his beloved Spit before he died, and the little girl who inspired the plane's creation - and went on to marry a movie star.Using documents, letters and photographs from the Imperial War Museums' unparalleled archive, plus exclusive first-hand interviews, these stories of the Spitfire are a revelatory collection of small but significant histories, to be treasured by all who love and admire the iconic plane. ...Show more

No Man's Land: The Untold Story of Automation on QF72 by Kevin Sullivan

nstinctively, I release my pressure on the sidestick. Out of my subconscious, a survival technique from a previous life emerges: Neutralise! I'm not in control so I must neutralise controls. I never imagined I'd use this part of my military experience in a commercial airliner ... On routine f light QF72 from Singapore to Perth on 7 October 2008, the primary flight computers went rogue, causing the plane to pitch down, nose first, towards the Indian Ocean - twice. The Airbus A330 carrying 315 passengers and crew was out of control, with violent negative G forces propelling anyone and anything untethered through the cabin roof. It took the skill and discipline of veteran US Navy Top Gun Kevin Sullivan, captain of the ill-fated flight, to wrestle the plane back under control and perform a high-stakes emergency landing at a RAAF base on the WA coast 1200 kilometres north of Perth. In No Man's Land, the captain of the flight tells the full story for the first time. It's a gripping, blow-by-blow account of how, along with his co-pilots, Sullivan relied on his elite military training to land the gravely malfunctioning plane and narrowly avert what could have been a horrific air disaster. As automation becomes the way of the future, and in the aftermath of Ethiopian Airlines flight 302 and Lion Air flight JT610, the story of QF72 raises important questions about how much control we relinquish to computers and whether more checks and balances are needed. ...Show more The modern aircraft carrier is without doubt one of the most exciting and hazardous operating environments in the field of warfare. The 'flattop' is a symbol of global military power without parallel, and it remains a capability beyond reach of all but the most well equipped navies. With the detail, pre cision and accuracy expected of Harpia Publishing, this latest volume provides a force report of the various air components and associated vessels fielded by those select nations that field fixed-wing-capable aircraft carriers. ...Show more

Taking to the Air: Illustrated History

The possibilities of flight have long fascinated us. Each innovation captivated a broad public, from those who gathered to witness winged medieval visionaries jumping from towers, to those who tuned in to watch the moon landings. Throughout history, the visibility of airborne objects from the ground has made for a spectacle of flight, with sizeable crowds gathering for eighteenth-century balloon launches and early twentieth-century air shows. Taking to the Air tells the history of flight through the eye of the spectator, and later, the passenger. Focusing on moments of great cultural impact, this book is a visual celebration of the wonder of flight, based on the large and diverse collection of print imagery held by the British Library. It is a study of how flight has been thought and pictured. ...Show more The New York Times bestselling author of Viper Pilot chronicles another thrilling chapter in American aviation history: the race to break the sound barrier. In the aftermath of World War II, the United States accelerated the development of technologies that would give it an advantage over the Soviet Un ion. Airpower, combined with nuclear weapons, offered a formidable check on Soviet aggression. In 1947, the United States Air Force was established. Meanwhile, scientists and engineers were pioneering a revolutionary new type of aircraft which could do what no other machine had ever done: reach mach 1--a speed faster than the movement of sound--which pilots called "the demon." Chasing the Demon recreates an era of excitement and danger, adventure and innovation, when the future of the free world was at stake and American ingenuity took the world from the postwar years to the space age. While the pressure to succeed was high, it was unknown whether man or machine could survive such tremendous speeds. A decorated military pilot with years of experience flying supersonic fighter jets, Dan Hampton reveals in-depth the numerous potential hazards that emerged with the Air Force's test flights: controls broke down, engines flamed out, wings snapped, and planes and pilots disintegrated as they crashed into the desert floor. He also introduces the men who pushed the envelope taking the cockpits of these jets, including World War II ace Major Dick Bong and twenty-four-year-old Captain Chuck Yeager, who made history flying the Bell X-1 plane faster than the speed of sound on October 14, 1947. Illustrated with thirty black-and-white photographs, Chasing the Demon recalls this period of the emerging Cold War and the brave adventurers pursing the final frontier in aviation. ...Show more