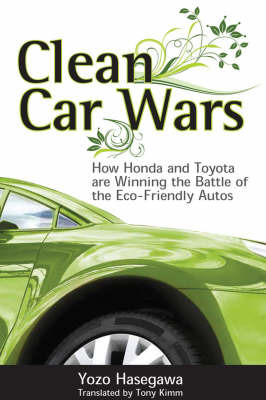 As American automakers lose market share, Honda and Toyota are soaring on the backs of their high-quality low-emissions vehicles. The increasing trend toward clean car technology means those companies that can build the best low-emission car will have the best chance of long-term success and survival. "Clean Car Wars" presents a revealing look at the Japanese auto industry and how its two biggest automakers are battling each other, and the world, for supremacy of this vital emerging market.

Yozo Hasegawa was born in 1943. After graduating from Keio University's economics department in 1967, he joined Nikkei Inc. as a journalist in the business and foreign-news departments, and was posted as a foreign correspondent and bureau chief in Warsaw and Vienna between 1982 and 1985. He returned to Japan as senior staff writer until his retirement in 2007. During his many years as a business journalist covering primarily the automotive industry, he has met frequently with global management luminaries such as GM CEO Richard Wagoner, Nissan Renault CEO Carlos Ghosn, Honda President, Takeo Fukui, Toyota Presidents Fujio Cho and Katsuaki Watanabe, and former GE CEO Jack Welch. Hasegawa is now a full-time lecturer at Teikyo University and adjunct professor at Gakushuin University in Tokyo, and is also a regular commentator on television and radio. Tony Kimm is a freelance translator, writer and movie subtitler who makes his home in Tokyo, Japan. He has worked for a major Japanese publishing company and has translated articles and publications for the Nihon Keizai Shimbun, the Asahi Shimbun and various Japanese government agencies. Tony, a Minneapolis native, graduated from the University of California, Berkeley.