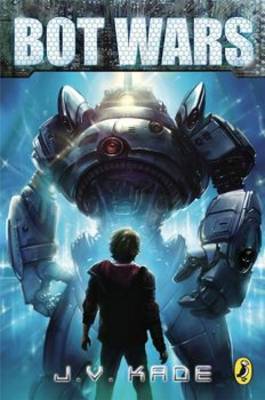 Twelve-year-old Aiden (Trout) St. Kroix lives with his older brother Po. Their father disappeared two years ago while fighting in the Bot Wars - a devastating conflict that began when robots became so advanced that they revolted and took the lives of thousands of people. When the government banned and declared all bots terrorists, Trout didn't question a thing. In the end, all he wanted was to find his dad. Desperate, Trout posts a video to the internet seeking help with his search, unwittingly unleashing a storm of danger as his brother is suddenly abducted and he is labelled a terrorist and a criminal himself. Trout goes on the run to seek answers, but it turns out that nothing is what it seems - not the government, not the bots, and not even his own father...

J. V. Kade lives in Michigan with her husband and two children. She is the author of both Bot Wars and The Meta-Rise. Visit her online at www.jvkade.com.